Warning signs show cracks in Israel’s edifice
Each trick in Israel’s bag will not work seamlessly. Israel’s most convenient ploy against the Palestinians is to paint them as prone to terror and violence. When, they accused six credible Palestinian organizations as terrorist in nature and scope, they forgot that defending human rights is legitimate especially when at the other end of the deal is a notorious human rights offender.  Israel’s colonial regime is cruel and violent. It is armed to the teeth and its cache of arms will be used against innocent civilians, or anyone who chooses to resist the militaristic occupation. The refusal of nine major powers in Europe to reject the terrorist tag that Israel wanted to stick on six Palestinian human rights networks has exposed Israel’s flimsy charges devoid of any real evidence. In fact, Israel cares little or nothing about who their target is. America, perhaps Israel’s most robust ally, often has their citizens targeted and killed with no repercussions. Such is impunity.

Intriguing too, is the exposé that the location for the new US Embassy is on land that was private Palestinian property confiscated by Israel after the 1948 war. The US took control of that land for its diplomatic compound in Southern Jerusalem known as the Allenby Complex. Palestinian families from East Jerusalem and the United States are calling on Washington and Israel to revoke the plans and respect the integrity of Palestinian ownership. Not everything that signs up with Israel is legitimate. Deals Israel makes despite being exposed as an apartheid State should not be allowed to stick. This includes what Biden signed on his recent trip to Israel.

In the same vein, the Abraham accords that Trump shaped alongside additional normalization steps between Israel and Arab governments are showing signs of weakening. The negative impact, especially on the streets, is being resented. The people fear the agreements wherein digital surveillance spyware, which will make it easier to heighten increase repression. There is also fear that Normalization will allow these countries who have opted for Normalization to avoid domestic policy modifications and persist with their violations of human rights and practices and malevolent treatment of political prisoners. Biden, much like Trump, is launching a new form of ‘authoritarian conflict management’ that will prompt deterioration of domestic conditions.

“Nine European Union states said on Tuesday they would continue working with the six Palestinian civil society groups that Israel designated terrorist associations last year, citing a lack of evidence for that claim…In a joint statement, the foreign ministries of Belgium, Denmark, France, Germany, Ireland, Italy, the Netherlands, Spain and Sweden said they had not received “substantial information” from Israel that would justify reviewing their policy.”
Read more from Reuters

No Path to Justice: Israeli Forces Keep Killing Americans While U.S. Officials Give Them a Pass
“As public as [Rachel Corrie’s parents and sister] had been in their efforts to get answers about Rachel’s killing, and as outspoken as they remain about the Palestinian cause, the Corries never talked in detail about their private discussions with U.S. officials, at first because they trusted that the process would yield the results they were seeking and later because revisiting the odyssey felt too overwhelming. The experience of seeking justice for Rachel, they say, at times felt just as traumatizing as her death itself…Over two days last month at Sarah’s home in a suburb of Olympia, the Corries spoke at length about their conversations with senior officials, including Blinken, CIA Director William Burns, and staffers working closely with Biden during his time in the Senate and as vice president…Together, the files and the Corries’ testimony paint a damning picture of the futility of U.S. efforts to seek accountability. The documents show that several senior officials attempted for months to extract answers from their Israeli counterparts. But the lack of political will on the part of the U.S. executive branch and Congress to impose consequences for Israeli human rights abuses reduced those efforts to meaningless gestures, with all players involved fully aware that they would lead to no real change. When they embarked on that process, however, the Corries knew none of this. So when they learned that Anton Abu Akleh, Shireen’s brother, had expressed the desire to meet with them, they readily agreed…On a Zoom call last month, the Corries spoke to members of the Abu Akleh family, who called in from Jerusalem and elsewhere in the U.S.”
Read more from The Intercept

“Israel’s military censors have lifted a ban on reporting the country’s use of armed drones, an official said on Wednesday, ending an open secret by admitting that the armed forces have unmanned attack aircraft and have used them. Palestinians have accused Israel of using armed drones in targeted killings in Gaza and the occupied West Bank, something never confirmed by Israel, which had previously barred all publication of news on the issue. There have also been numerous international news reports of Israeli drones attacking targets in Lebanon and Iran, which have never been confirmed officially by Israel.”
Read more in Reuters

Land for New U.S. Embassy in Jerusalem Was Owned by Palestinians before 1948, Files Show 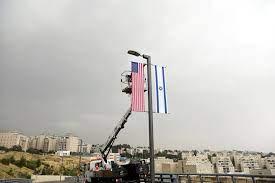 “Palestinian families from East Jerusalem and the United States are calling on Washington and Israel to cancel plans for building the U.S. embassy in Jerusalem, saying that its planned location sits on land that was private Palestinian property confiscated by Israel after the 1948 war. About a year and a half ago, the U.S. government, in coordination with Israel, drafted a plan for a large diplomatic complex in an area of Jerusalem known as the Allenby Complex in southern Jerusalem. According to the plan, the U.S. embassy would move into that complex; until then, it would remain in a temporary site in the Arnona neighborhood. On Sunday, two days before U.S. President Joe Biden’s visit to Israel, several Palestinian families, in conjunction with Adalah – The Legal Center for Arab Minority Rights in Israel, presented documents testifying that some of the land slated for the diplomatic compound project had belonged to them before 1948. The families, including Habib, Qleibo, El Khalidi, Razzaq, and El-Khalili, brought forward decades’ worth of rental contracts between them and the Mandatory government for the land…The land is located west of the Green Line, and like all other Palestinian property in west Jerusalem, it was transferred via the Absentee Property law into Israeli hands in 1950.”
Read more from Haaretz

Reactions to the Jerusalem Declaration

“…  @POTUS signed an agreement with Israel that yet again throws Palestinians under the bus, enabling more Israeli war crimes against Palestinian families. In response, Palestinians and allies are speaking out. Here’s what they’ve had to say:

Will Israel further normalize relations with its Arab neighbors?

Research on the Abraham Accords, as well as other normalization steps between Israel and Arab governments, show that such agreements can have a negative impact on conditions within participating countries. Specifically, these kinds of agreements facilitate the sharing of technologies such as digital surveillance spyware, which can enable authoritarian regimes to increase repression. Normalization with Israel can also be a way for Arab countries to win credit with Washington without making domestic policy changes on issues such as human rights and political prisoners. The regional security framework Biden reportedly aims to construct might be better understood, in this light, not as a peace agreement but as a form of authoritarian conflict management. For the citizens of countries that join, domestic conditions may worsen.”
Read more in Washington Post