Beating Israeli colonialism with the BDS stick
Academic and cultural boycott of Israel is an act of solidarity with Palestinians who are living with the injustices of a fascist regime. These boycotts have the  effect of isolating the apartheid regime. BDS is an imperative because Israel does not conform to human rights law standards set by the United Nations and with even the minimum political ethics.

Economic boycott varies in the sense that the focus is on inflicting economic damage on Israel, and to point toward moral outrage. The intent is to compel Israel to alter its colonialist, racist, political behavior. Both work to end international support for Israel’s oppression of Palestinians and pressure Israel to comply with international law.

Since 2005 Palestinians have been calling for BDS (Boycott, Divestment and Sanctions) against Israel to pressure it to end its military occupation, repeal its apartheid laws and allow Palestinian refugees to return to their homes. Israel has tried to find ways around the apartheid by creating financial support for Film festivals knowing that young people, and those interested in culture and art can be maneuvered to trust in Israel’s claims and propaganda.

Human Rights activists who support justice for Palestine and an end to the Israeli colonialism keep an alert watch on BDS initiatives and respond with agility through campaigns. They will use any possible occasion to make the wider public aware of the cruel ways of Israel’s apartheid system and its racist structure.

Palestine Updates shares with readers a report from John Minto, National Chair, Palestine Solidarity Network Aotearoa highlighting upcoming protests against the Doc Edge Film Festival which, with support from the Israeli Embassy, seeks to ‘art wash’ its crimes against Palestinians. We also share news from the Palestinian Boycott, Divestment and Sanctions National Committee (BNC), the broadest coalition of Palestinian civil society, which acknowledges and celebrates the resolution recognizing and condemning Israel’s crime of apartheid against the Palestinian people by the Parliament of Catalonia.

Additionally, Exeter College’s JCR has recently passed an unprecedented motion condemning Israel and resolving to purchase and display a Palestinian flag in the JCR. It has, thus, moved to donate funds in support of medical aid for Palestinians. JCR suggested this move in recognition of recent developments like the murder of the Palestinian journalist Shireen Abu Akleh at the hands of Israeli forces, which has “led to widespread outcry”.
These are our highlights for this edition. 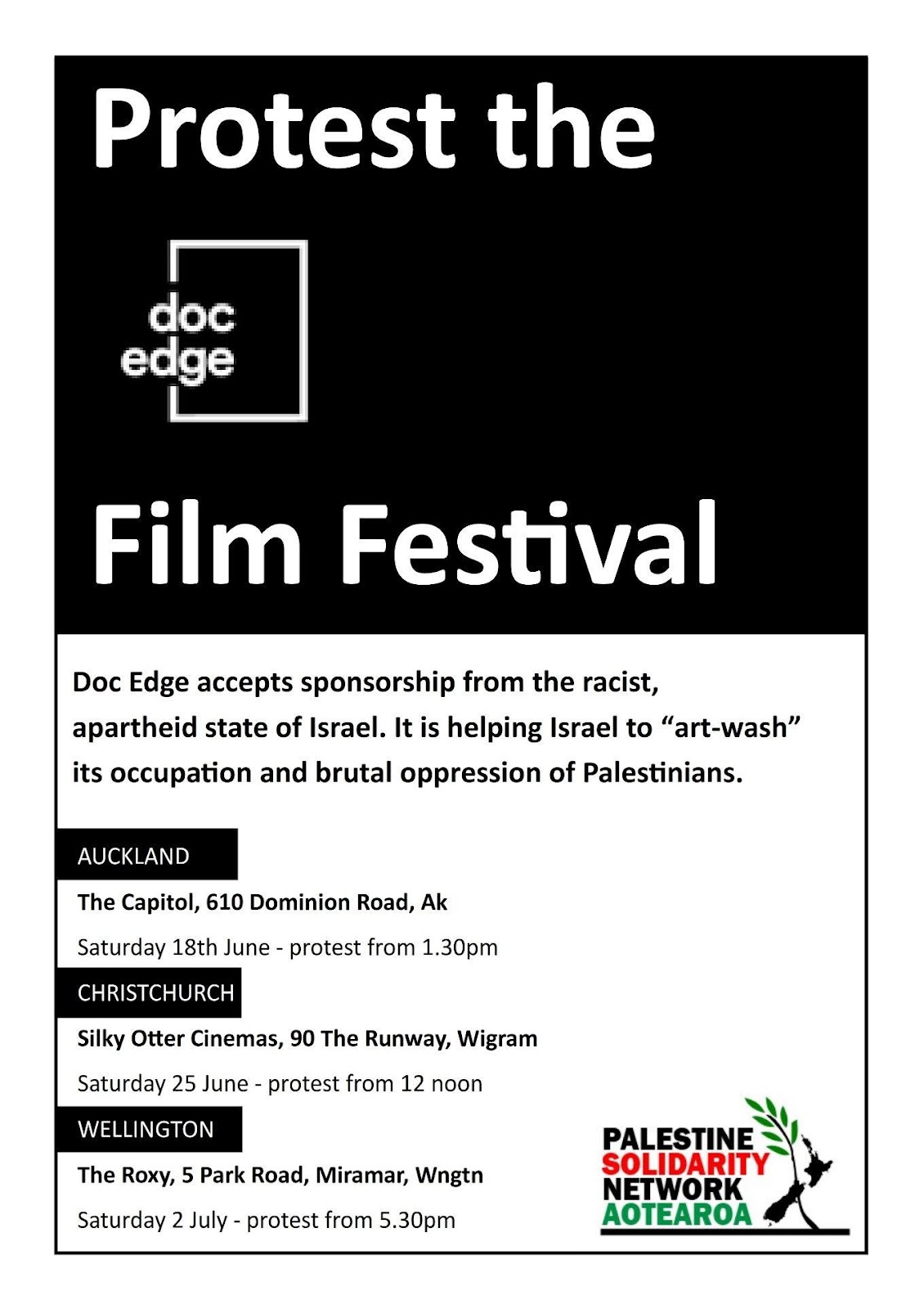 Protests will take place during the Doc Edge Film Festival to call out the festival’s funding support from the Israeli Embassy.

“By including the Israeli Embassy as a “financial supporter” of the festival Doc Edge it is helping Israel “art-wash” its crimes against the Palestinian people”. Within the last month Israel has announced the ethnic cleansing of over 1000 more Palestinians from their land (the largest cleansing since 1967); the building of over 4,000 more homes in illegal Israeli settlements on stolen Palestinian land; murdered leading Palestinian journalist Shireen Abu Akleh and then launched a shocking attack on pall-bearers and mourners at her funeral.

And last week a state-sanctioned march by racist Israelis through occupied East Jerusalem attacked Palestinians while chanting “death to Arabs”. “It is unacceptable that this festival would side with the racist, apartheid state of Israel against calls for freedom from Palestinians” And Doc Edge puts the logo of this racist state’s representatives on its festival programme!

Since 2005 Palestinians have been calling for BDS (Boycott, Divestment and Sanctions) against Israel to pressure it to end its military occupation, repeal its apartheid laws and allow Palestinian refugees to return to their homes.|

The resolution calls on the Government of Catalonia and the Spanish Government to use all political and diplomatic tools at their disposal to compel Israeli authorities to implement the recommendations issued by Amnesty International and Human Rights Watch. It also calls for ensuring that human rights are at the heart of all bilateral and multilateral agreements with official Israeli institutions by applying heightened due diligence to avoid any support of the apartheid system.
Source:

Exeter College’s JCR has recently passed an unprecedented motion condemning Israel and resolving to purchase and display a Palestinian flag in the JCR, and has moved to donate funds in support of medical aid for Palestinians. JCR suggested this move in recognition of recent developments like the murder of the Palestinian journalist Shireen Abu Akleh at the hands of Israeli forces, which has “led to widespread outcry”.

Exeter JCR in the motion also pointed to the fact that Human Rights Watch has stated that “Palestinians face systematic discrimination merely because of their race, ethnicity, and national origin” and that Amnesty International has “declared Israel an Apartheid state.” The motion was also pushed on the basis that the situation seemed to be escalating, stating that “Israel has killed five times as many Palestinians in 2022 than it killed in the same period in 2021, including the storming of the Al-Aqsa Mosque that injured over 150 Palestinians.” JCR expressed that the college “should do whatever possible to show solidarity with Palestine amidst this international crisis”.

The JCR resolved to buy a Palestine flag for display in the JCR, as well as to donate £100 to Medical Aid for Palestinians (MAP) which provides medical aid and aims to develop the Palestinian healthcare system long-term.
Source:

Why has Gaza’s sea turned black?

In June 2006, following the capture of Israeli soldier Gilad Shalit, Israel bombed the Gaza Strip’s only power plant. Since then, Palestinians have lived an average of two-thirds of those ensuing years in darkness amid a blockade Israel intensified in 2007. That comes to roughly 95,000 hours with no electricity over 16 years. The International Committee of the Red Cross (ICRC) estimates that over 80 percent of Palestinians in Gaza have electricity for a meager six to eight hours a day. B’Tselem reports that Gaza’s power plant runs on a scant 180 megawatts when Gaza’s population of over 2 million needs at least 600 megawatts. A main cause of the electricity shortage in Gaza is no secret: When Israel is not bombing the power plant; it is blocking the entry of the fuel needed to operate it – an action that is indicative of Israel’s policy of collective punishment against the Palestinians.

But what does it mean to be on the other end of this policy of collective punishment? To live your life in the dark? The cost of a life with no electricity is so immense that a person living outside Gaza might struggle to imagine it. And though statistics give us a grim overview – 94 percent of Palestinians in Gaza “believe that the lack of electricity is affecting their mental health,” according to that same ICRC survey – how can a person who lives an ordinary life imagine being deprived of such a basic necessity? We can start with daily life in Gaza.
Source: 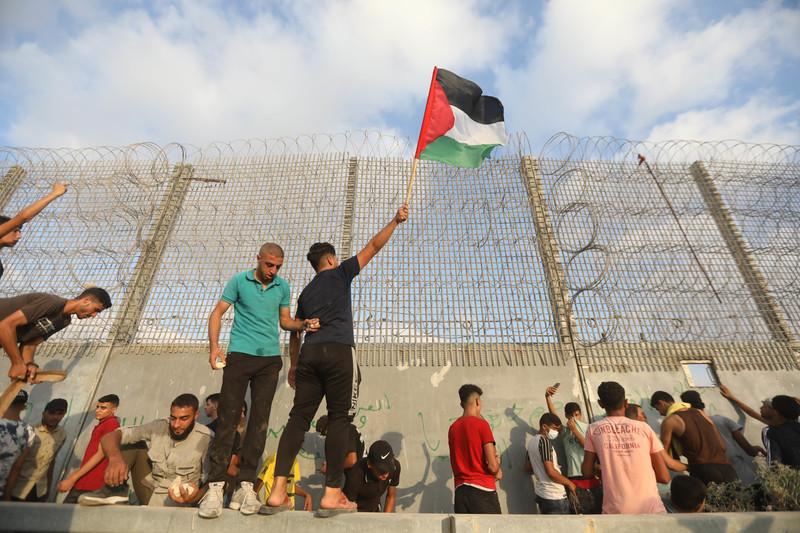 The US president will be traveling to the Middle East next month to reinforce his country’s “ironclad commitment to Israel’s security,” the White House announced on Tuesday. That phrase has become something of a mantra for Joe Biden’s administration, with his national security adviser Jake Sullivan recently stating that he “discussed ironclad support for Israel’s security” with Israel’s defense minister. Sullivan made that proclamation to Israeli defense minister Benny Gantz in May just days after Israeli soldiers shot and killed legendary Al Jazeera correspondent Shireen Abu Akleh, who was a US citizen.

The Biden administration has allowed the Israeli military to probe itself over Abu Akleh’s death rather than calling for an independent investigation or launching one of its own. That is what “ironclad support for Israel” means in practice: an unyielding commitment to Israeli impunity and Palestinian un-freedom to the tune of at least $3.8 billion in military aid to Tel Aviv per year. Washington’s ironclad commitment to Palestinian un-freedom was demonstrated this week when Michèle Taylor, the US representative to the UN Human Rights Council, delivered a statement “expressing deep concern” over a new permanent commission of inquiry into Israel’s system of repression against Palestinians as a whole.

That commission published its first report last week. It states that dismantling the Israeli occupation imposed on Palestinians in the West Bank and Gaza since 1967 “remains essential in ending the persistent cycle of violence.”…The culture of impunity begets further human rights violations according to the report. The “promotion of accountability” is a primary focus of the UN commission. That directly contradicts Washington’s “ironclad support for Israel.”
Source: