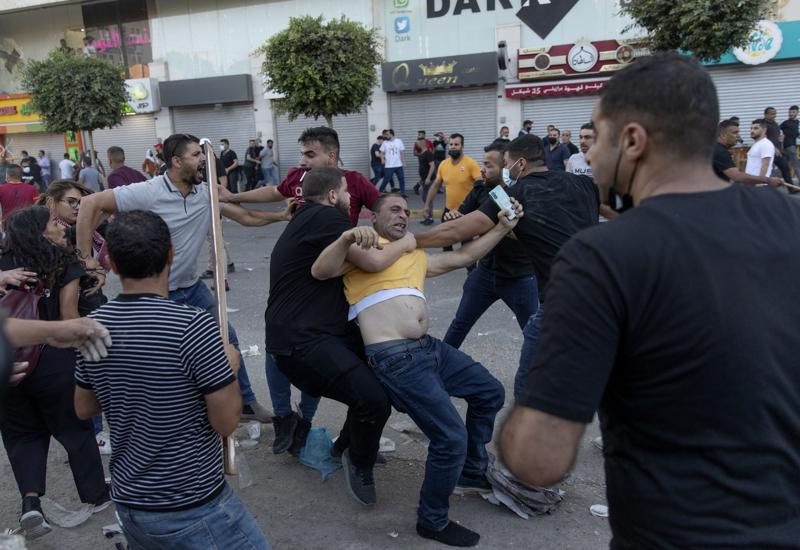 1 of 6
Palestinian security officers in plainclothes detain a demonstrator during clashes that erupted following a rally protesting the death of Palestinian Authority outspoken critic Nizar Banat, in the West Bank city of Ramallah, Saturday, June 26, 2021. Banat who was a candidate in parliamentary elections called off earlier this year died after Palestinian security forces arrested him and beat him with batons last Thursday, his family said. (AP Photo/Nasser Nasser)

JERUSALEM (AP) — Thousands of Palestinians have taken to the streets in recent days to protest against President Mahmoud Abbas and the Palestinian Authority, whose security forces and supporters have violently dispersed them.

The demonstrations were sparked by the death of an outspoken critic of the PA in security forces’ custody last week, but the grievances run much deeper. Abbas’ popularity plunged after he called off the first elections in 15 years in April and was sidelined by the Gaza war in May. The PA has long been seen as rife with corruption and intolerant of dissent.

The Palestinian Authority is one of the last manifestations of the peace process, which has been dormant for more than a decade, and is seen by Israel, the United States and the European Union as a key partner in promoting stability.

A STATE IN WAITING

The PA was established in the 1990s through interim peace agreements between Israel and the Palestine Liberation Organization, which still represents the cause internationally. It was seen as a state-in-waiting and was granted limited autonomy in parts of the West Bank and the Gaza Strip.

Israel and the PLO held several rounds of peace talks throughout the 1990s and 2000s. The Palestinians, negotiating from a position of weakness, sought an independent state in east Jerusalem, the West Bank and Gaza, territories Israel seized in the 1967 war. They were never able to reach an agreement, and there have been no substantive talks since 2009.

The Islamic militant group Hamas seized power in Gaza in 2007, a year after winning an landslide victory in Palestinian elections. That confined Abbas’ authority to parts of the West Bank. Several attempts at Palestinian reconciliation over the years have failed.

While the PA has ministries, security forces and the trappings of a state, its authority is limited to major population centers that amount to around 40% of the West Bank. Israel has overarching authority and controls access to the PA-run territories, which Palestinians routinely compare to the Black-ruled Bantustans established by apartheid South Africa.

The increasingly authoritarian PA is dominated by Abbas’ secular Fatah party, which is led by a small circle of men in their 60s and 70s. The 85-year-old Abbas, whose four-year presidential term expired in 2009, leads the PA, the PLO and Fatah.

The PA leadership, which enjoys special privileges for cooperating with Israel, is widely seen by the Palestinians as corrupt and self-serving. Its policy of coordinating security with Israel to go after Hamas and other mutual foes is extremely unpopular. Protesters at the Al-Aqsa mosque on Friday accused the PA of being collaborators, a charge that amounts to treason.

Last week, security forces raided a home in the occupied West Bank to arrest Nizar Banat, who had repeatedly criticized the PA in online posts. His family says they beat him with batons before dragging him away. The PA says it has launched an investigation into his death, which ignited the latest protests.

Banat was a candidate in the parliamentary elections that Abbas called off in April when it looked like his fractured Fatah would suffer an embarrassing defeat to Hamas. During the Gaza war that erupted shortly thereafter, Hamas was widely seen as fighting for Palestinian rights and defending Jerusalem while the PA did nothing.

A poll taken after the war found a dramatic rise in support for Hamas, with more than half of respondents saying it should lead the Palestinian movement.

Despite his unpopularity, Abbas can count on the support of powerful friends, with Israel, the U.S. and Western donors deeply invested in the PA’s survival. The PA also pays the salaries of tens of thousands of Palestinian civil servants who would otherwise struggle to find work.

By administering major population centers, the PA reduces the financial and security burden of Israel’s 54-year military occupation of the West Bank. It also helps preserve the idea of an eventual two-state solution, even as Israel expands Jewish settlements and consolidates its control over the West Bank and east Jerusalem.

The EU has invested hundreds of millions of dollars in the PA over the years, and the U.S. and other nations have trained and equipped its security forces. The Biden administration has said it hopes to strengthen the PA and work with it to rebuild Gaza — where it has no power.

Israel, the U.S. and the EU all prefer the unelected PA to Hamas — which they consider a terrorist group — or to the chaos that could ensue from the PA’s collapse. They are committed to working with the PA to manage the conflict and reduce tensions until some future time when the peace process can be revived.

But after weeks of unrest in Jerusalem, a war in Gaza and now street violence in the West Bank, that approach seems increasingly fraught.
https://apnews.com/article/middle-east-government-and-politics-afd7e5263151158e57a6e521a0802ef0