When Sahar Khalifeh’s “Passage to the Plaza” appeared in English this year, thirty years after its initial publication, it seemed out of sync – too late and too overshadowed by the coronavirus. Yet perhaps this is just the right time: its locked-in world of curfews and domestic violence speak to 2020 as much as it did to 1990.
By Marcia Lynx Qualey

Bab as-Saha, which has been retitled Passage to the Plaza in Sawad Hussain’s vibrant translation, is set during the early days of the First Palestinian Intifada (1987-1993). Like many of Sahar Khalifeh’s novels, it centres on a significant historical moment that we expect to see from a bird’s-eye view, or through the eyes of “newsworthy” men. But instead of showing us UN resolutions or speeches or arrests, this novel brings us down into the rich, contradictory and difficult lives of ordinary women.

Many of the Palestinian fictions written in the ’60s, ’70s and ’80s focussed, in the words of Gazan novelist Atef Abu Saif, on “national issues and values”, such that, “peculiarities of individuals were glossed over in favour of humanitarian causes[.]”

Khalifeh’s novel, by contrast, is all about less-than-heroic individuals, elevating them above national issues with compassion and humour. Indeed, as the novel starts, a young woman named Samar is comically chasing down the much older Sitt Zakia with a questionnaire, asking what changes she has seen in women’s lives since the Intifada began.

Women and the intifada

Optimistic Samar is a recent university graduate, perhaps modelled on a young Sahar Khalifeh, and she wants something positive to put in her research. Yet Sitt Zakia has little interest in Samar’s rose-tinted glasses or her belief in research. 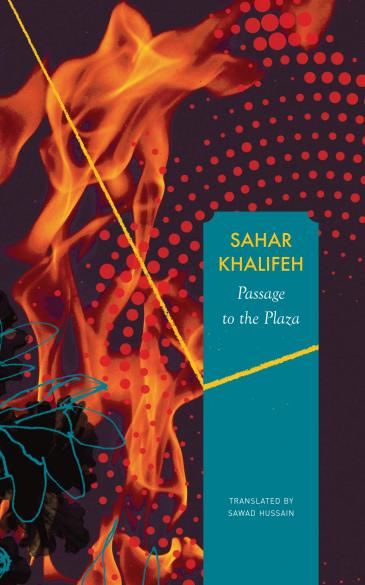 A major omission, now corrected: for thirty years, Sahar Khalifeh’s Bab as-Saha was not in English translation. This short, sharp-witted novel got both raves and rebuttals when it was published in Arabic in 1990. It appeared in German translation in 1994 and French in ‘97. A few years later, the Arab Writers Union voted it one of the best novels of the twentieth century, and it has since become Khalifeh’s most popular work

Here as elsewhere, the action is carried forward by the novel’s rapid-fire dialogue. It often reads like the script of a play set around a few central characters: Samar, the idealistic researcher; Sitt Zakia, community midwife; Nuzha, sex worker; Hussam, eligible bachelor and injured hero; and Ahmed, Nuzha’s younger brother.

As they talk, Samar and Sitt Zakia come around to the thorny topic of Nuzha. Sitt Zakia says that no one can help her, while Samar rebuts:

“Me? I’m going to go meet her and get her to fill in my survey.”

But Samar goes, and Passage to the Plaza is set mostly inside this house of ‘ill repute’. Nuzha is the daughter of a sex worker named Sakina, who was stabbed to death years back. Yet the house is still referred to as “Sakina’s house”. For Nuzha, it’s impossible to escape her mother’s shadow.

Throughout Passage to the Plaza, characters are trapped not only by the Israeli curfew, soldiers, and walls, but also by abusive relationships and societal expectations. After appearing with her questionnaire, Samar ends up locked in with Nuzha for nine days. Once released, she has to face her family, who are furious that she was with Nuzha and Hussam.

Her mother has an anxiety attack. Her brothers drag her out of bed and slap her. Worse, Samar feels she can’t fight back: “When the soldiers had hit her, she had fought back, bringing down the wooden plank in her hand on them, and anything she could find to strike them with. But now, she was just a dinghy tossed by the waves and squalls.”

Throughout the novel, characters show a great deal of patriotism, but little solidarity. It’s not only men who rain blows on women. The solidarity between women is also brittle. In one scene, Umm Azzam comes to Nuzha’s house in search of her sister-in-law, Sitt Zakia.

Sitt Zakia doesn’t have to worry about being at Nuzha’s house. She has long since divorced, and she’s remade herself as the community’s tight-lipped, conservative midwife. When Umm Azzam arrives at “Sakina’s house”, she doesn’t know her son Hussam is lying, feverish, in the next room. She unburdens herself to Sitt Zakia, telling her she can’t take it anymore, “pleading in an extremely humble tone, ‘Please take me in’.” Umm Azzam adds: “I’ll be your servant: cook your food for you and carry your bag from house to house.”

But instead of having mercy on her sister-in-law, Sitt Zakia thinks of her brother and the gossip. She tells Umm Azzam to go home and bear the abuse.

No heart of gold

Nuzha helps the injured Hussam, hiding him in her home. But she’s hardly a prostitute with a heart of gold, forced into this life against her will. Instead, she’s a sharp-tongued, difficult woman who can’t bear hypocrisy. There is only one person Nuzha still adores: her younger brother, Ahmed. He, on the other hand, is less than proud to have a sister who’s a sex worker.

The novel has aspects of Greek tragedy. Near the end, while grieving, Nuzha curses Palestine, and a chorus of other women are shocked: “They slapped their cheeks, flabbergasted. ‘This one’s off her rocker! God help you, Palestine!'” Yet this moment has a comic edge, too, as the women act as if Nuzha’s lack of patriotism – and not the Occupation – is what threatens Palestine.

It is a delight to read this fast-paced, theatrical, witty novel in English translation while the original is marking its 30th anniversary. Rather than feeling out of date, Passage to the Plaza reflects the past while also speaking directly to the present.
Marcia Lynx Qualey
https://en.qantara.de/content/book-review-sahar-khalifehs-passage-to-the-plaza-its-all-a-question-of-timing

The Hundred Years’ War on Palestine: A History of Settler Colonialism and Resistance

Passage to the Plaza