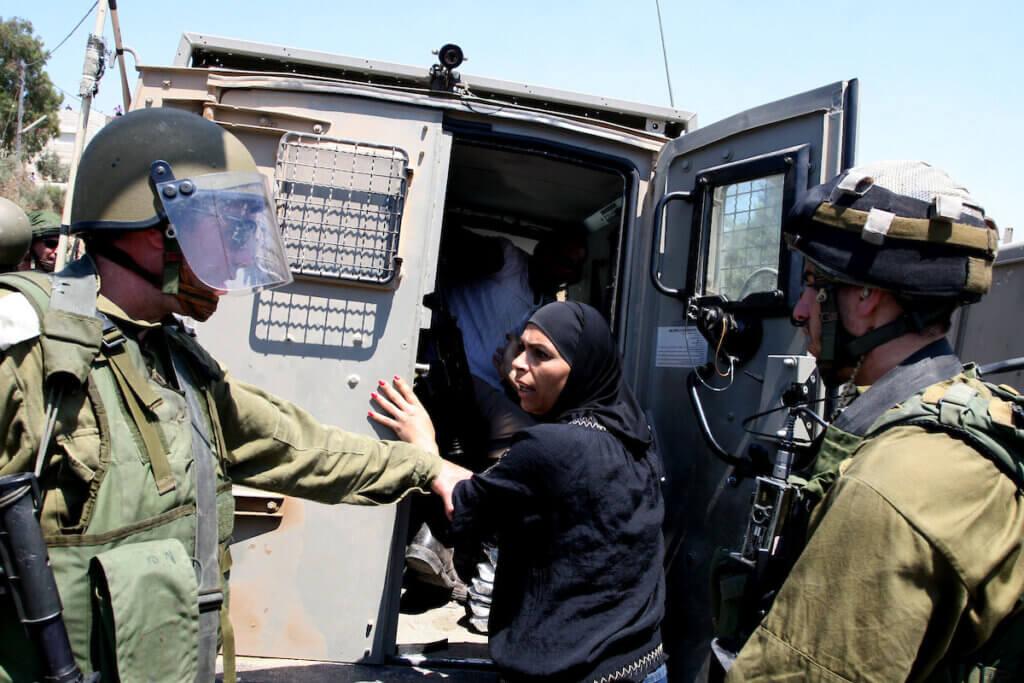 A Palestinian woman is detained by Israeli soldiers during a demonstration
against israeli occupation and settlements expansion, on July 15, 2011 in
the west bank village of nabi saleh (photo: Issam Rimawi/APA images)

Every year since 1948, Palestinians in historical Palestine and the diaspora commemorate on May 15th the ongoing Nakba (Arabic for “catastrophe”), recalling the forced exodus of 750,000 indigenous Palestinians from their lands and the ethnic cleansing of towns and villages at the hands of Zionist forces.  At a time when Palestinians are facing remorselessly fierce campaigns to delegitimize their narrative and suffocate any criticism of Israel’s oppression against them on the flawed premise that conflates anti-Zionism with antisemitism, this essay attempts to revisit the Nakba as a departure point in order to deconstruct Zionism and redefine it as a gendered colonial project. It places women at the center of revising the Nakba to highlight Zionist strategies to instrumentalize sexual violence as a primary tool of eliminating indigenous Palestinians, and maintaining the Israeli settler-colonial regime.

Zionism is a settler-colonial project
Since the mid-1990s, the settler-colonial paradigm has gained prominence in Palestine studies.  The emerging debates on the validity and applicability of the settler-colonial paradigm to the context of Palestine (led by some scholars e.g., Said, Ilan Pappe, Lorenzo Veracini, Kimmerling, etc) marks a significant intellectual and epistemological shift. In this argument, Zionism is to be perceived as a colonial movement that is structured by the logic of elimination of indigenous populations in order to erect a Jewish-majority settler colony over the forcefully disposed land.

Historically, Zionism emerged at the end of the 19th century prompted by European colonization. The Zionist movement did not just establish an alliance with the British imperialism to carry out its plan for creating a new Jewish state in Palestine, but it further introduced itself as an ally involved in colonization. In fact, Zionism clearly stated itself as “a Jewish movement for colonial settlement in the Orient.” Like most settler-colonial enterprises, Zionists’ subsequent dispossession of the indigenous Palestinians was, and is, a systematic outcome of the logic of elimination which entails the erasure of the ‘inferior’ indigenous population (Palestinians). Consequently, Zionists waged several wars (starting from 1948 war) against the native Palestinians who have been subject to an ongoing ethnic cleansing campaign. Targeting women, the producers of the next generation, is at the center of Zionists’ eliminatory strategy wherein sexual and gender-based violence against Palestinian women has been used as a tool to subjugate and dispose of the Palestinian people as a whole.

Sexual and gender-based violence at the service of settler-colonization
Colonization, as decolonial feminists argue, is a gendered act carried out by imperial workforces mainly men. Colonizers employ sexual violence as a means to penetrate, subjugate, eliminate and silence the dispossession of natives. Sexual violence against indigenous women can clearly be traced through the history of colonialism in the United States, Canada, Australia, etc. Rape, mutilation, mass killing, sterilization, and sexual brutality among other acts have been used widely to destroy natives’ populations and quell their capacity to resist and thus lay the groundwork for the colonialist conquest.  For instance, Andrew Jackson, the seventh president of the United States from 1829 to 1837, supervised the mutilation of about 800 Creek Indians; he and his men massacred Indian corpses, cutting off their noses to count and preserve a record of the dead.

The colonizers targeted native women mainly as they are the producers of the next generation and, hence, pose a ‘demographic threat’ to the colonizer’s exclusive dominion over the expropriated territory. [1] Similarly, Zionism as a settler-colonial project is inherently eliminatory and seeks to exterminate native Palestinian bodies and expropriate their land to erect a new colonial entity instead. This cannot be separated from the colonial ‘logic of sexual violence’ against indigenous Palestinian women, and that violence is not, by any means, an epiphenomenon or accidental consequence of a Zionist oppression. It is, rather, embedded in the ideology of Zionism and a systematic production of the colonialist and orientalist mentalities of its forefathers.

Palestinian women have been subject to disproportionate Zionist violence which targets their own bodies, sexuality, and identities. They have shouldered the heaviest burden due to the ongoing Israeli settler-colonization not only because of their gender identity as women but also because of their national identity as members of the ‘demographically undesirable’ population. Indeed, women’s bodies became a battleground on which Zionist forces executed an ethnic cleansing of indigenous Palestinians.

Raping Palestine in 1948, and the invasion of women’s bodies
During the 1948 war (and afterwards), Zionist forces deliberately employed well-calculated attacks against Palestinian women to intimidate and force the indigenous population to flee. The Zionists exploited sexualized Orientalist perceptions of Palestinian sexuality such as those related to the concept of women’s honor ‘Erd’ to push Palestine out of their lands and break their capacity to resist the colonial oppression.

Consequently, many Palestinian families fled their homes primarily because of concerns over their women being raped by Zionist forces. The spread of horrific stories across the country about the rape of women in villages attacked by Zionists played a significant role in the mass terrorization and forced males to prioritize the honor of their womenfolk ‘Erd’ over defending their land ‘Ard’ which facilitated the plans of the ethnic cleansing. A stark example of the Zionist rape tactic appears in the notorious Deir Yassin massacre in April 1948 when some of 300 villagers were killed. The village was planned to be cleansed according to Plan Dalet (or Plan D is the name that was given to the chief plan for military operations in the 1948 war). The Zionist militias attacked the village on the ninth of April; killing a dozen of its inhabitants while the remaining villagers were then gathered in one place and murdered. The massacre was associated with explicit gendered atrocities as many Palestinian women were reported to be sexually harassed, raped, and then killed. [2]

A mass terror clouded the other villages after Deir Yassin massacre; the few survivors gave atrocious stories on the massacre which revealed that Zionists deliberately targeted women’s bodies. Consequently, under the heavy burden of fear of a similar fate and the inner struggle to protect their honor, many Palestinians in nearby villages were terrorized into flight. Although there are not yet accurate statistics on rape cases committed during the Nakba, there is ample evidence reported by the International Red Cross, the confessions of the rapists, and the declassified Israeli state archives. [3] Palestinian women and girls were raped in villages and urban cities the Zionist forces had attacked such as Acre, Ramle, Deir Yassin, and Tantura, among others. For instance, David Ben-Gurion, the first Israeli prime minister, overtly discussed the rape and sexual oppression of Palestinian women during 1948 in his diary. Gurion was informed about each case and cited them in his diary — though some cases have been censored out by his editors e.g., the notorious gang-rape in Nirim military outpost which has been revealed in October 2003, when the Israeli newspaper, Haaretz, published its horrific details based on the testimonies of the rapists themselves. The atrocities and violations of women’s bodies and sexualities did not stop there. And the deliberate targeting of Palestinian women is not limited to the atrocities committed during the 1948 war.

Sexual and gender-based violence is ever-present in state-sponsored policies and practices. Women are still shot at checkpoints, sexually and verbally harassed, arrested, interrogated, terrorized, their social fabric is destroyed, their homes are raided at nights or, worse, demolished, are denied the unification rights with their spouses and families, etc; all of which aimed eventually at ethnically cleansing Palestinians.

Conclusion
Reframing Zionism as a gendered colonial enterprise is critical to comprehending the historical circumstances that produced, and continue to reproduce, present gender oppression against Palestinian women which inescapably intersects with the colonial practices of collective dispossession, displacement, and ethnic cleansing against Palestine’s native population.

It is through invading indigenous women’s bodies that the settler-colonization project thrives and sustains its exogenous polity. Therefore, undoing such gendered colonial structures is to center indigenous women liberation as a key factor in the process of decolonization.