The planned settlement is intended to double the size of the settlement of Efrat while damaging the only remaining area in the Bethlehem area that could enable sustainable Palestinian development.

The plan would seriously jeopardize the prospect of reaching a two-state agreement and would impede the territorial continuum between Bethlehem and the southern West Bank, and therefore the viability of a Palestinian state. The petition was filed after the Custodian of Government and Abandoned Property rejected two weeks ago a letter of appeal by Peace Now and the Palestinian landowners from the area. The letter contested demanded that the land be allocated to the Palestinians, and not to the Efrat settlement.

This is the first time the issue of land allocation in the Occupied Territories is being brought to trial. For over fifty years, virtually all public land that Israel has allocated in the West Bank has been for settlement purposes, and not for the benefit of the Palestinian public, despite consisting of more than 86% of the West Bank population. This discriminatory policy is one of the key building blocks of the separation and discrimination regime Israel operates in the Occupied Territories and is a blatant violation of international law and basic principles of fairness and equality.

Peace Now: “The decision to allocate a-Nahla land for a new settlement is illegal, immoral and un-Jewish. Implementing this plan will severely damage not only the Palestinian landowners and the development capacity of the Bethlehem area, but also the ability to reach a future peace agreement and territorial compromise for a future Palestinian state alongside a secure Israel. The land should be allocated for Palestinian development in the region.”

In 2004, Israel declared approximately 1,300 dunams south of Bethlehem near the village of a-Nahla as state land. Nine Palestinian landowners filed appeals regarding the declaration. The appeals committee accepted their claim for approximately 100 dunams, yet for roughly 1,200 dunams it determined that the landowners did not prove that they had cultivated the land as consecutively and intensively as required. The landowners filed a petition to the High Court of Justice, which was rejected in January of 2016.

On February 7, 2019, Peace Now, along over a dozen landowners, turned to the Civil Administration’s Custodian of Government and Abandoned Property demanding that the intention to allocate land to the Ministry of Housing be revoked and allocated to Palestinians instead.

On May 3, 2020, more than one year later, the letter of appeal was rejected by the Civil Administration, which then wrote to the Housing Ministry that it could begin designing a plan for the new Givat Eitam “settlement neighborhood,” reportedly for some 7,000 housing units.

With the rejection, Peace Now’s attorney Michael Sfard contacted the Civil Administration demanding that it refrain from giving the Housing Ministry the allocation for 30 days to allow Peace Now and the Palestinian landowners to challenge the decision in the High Court. Outgoing Defense Minister Naftali Bennett, in his last days in office, chose to dismiss our request and approved the allocation immediately and even issued a press release. Subsequently, we filed the petition.

Peace Now’s main arguments were threefold:
1. The allocation of land to build a settlement contravenes Israel’s duties to protect the land for the local Palestinian population according to international law;
2. Allocating land to Israelis over Palestinians is tainted by discrimination since 99.8% of West Bank land allocated since 1967 has been gone primarily to Israeli purposes, and
3. The Palestinian need for the land in question is far greater than that of the Efrat settlement, as a Peace Now spatial Planning analysis confirms. For more on the legal arguments of the appeal, read here. 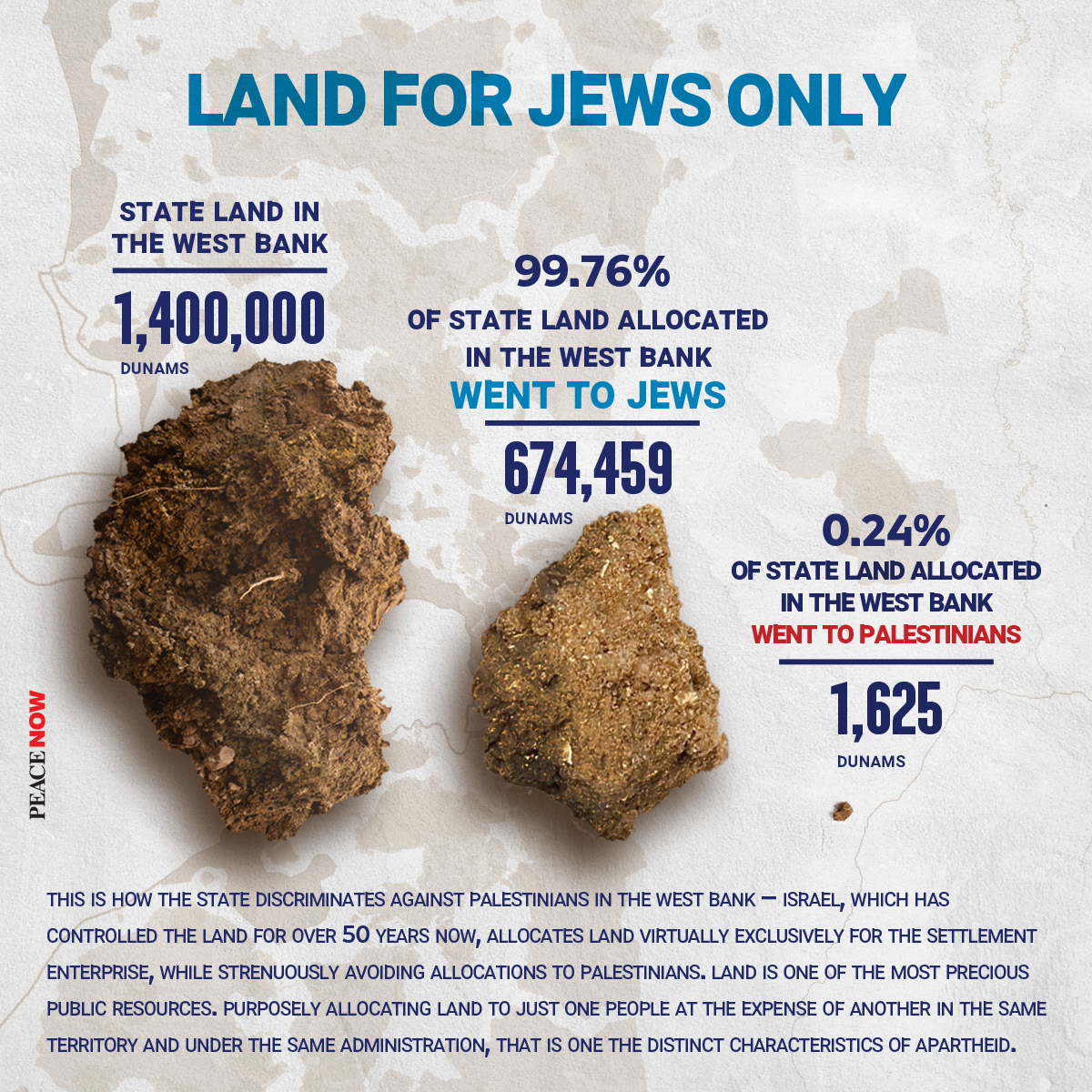 Excerpt from the petition:

“For over fifty years of occupation, Israel has done all it can to take care of the establishment and expansion of the settlement enterprise in the West Bank, at the expense of and serious harm to the Palestinian protected residents. In recent decades, the main tool at its disposal for advancing its political-national goals has been the [state land] declaration mechanism and allocation policy. Through the cynical and massive exploitation of this mechanism, Israel has promised vast tracts of territory to expand the settlement enterprise in the Occupied Territories by pushing the needs of the Palestinian population to the bottom, utilizing its public resources, engaging in harsh and deliberate discrimination, and depriving Palestinian villagers. The time has come for the Israeli government to recognize its duty to ensure the welfare of the protected occupied population and to repeal its criminal allocation policy. The allocation of land in the a-Nahla area for the use and needs of the petitioners and the Bethlehem community will be a start toward fixing this [longstanding policy].”

For more information, see here
For the wording of the petition [in Hebrew], click here.
For the planning opinion on the area’s need for Palestinians [in Hebrew] – click here

Celebrities, activists call for Eurovision to be moved from Israel