The National Bureau for defending land and resisting settlements stated in its latest weekly report, that Israeli security officials described the Israeli Gov’t as creating a state of security chaos, due to its failure of holding settlement security officers accountable for their violations against the Palestinians in the settlements being responsible for security in the settlements, as their salaries are paid by the Ministry of Security, and the Israeli army provides them with weapons and security vehicles to arrest Palestinians, as well as they affiliated to the Israeli Army that gives them a very wide power to arresting Palestinians, detaining, searching, or confiscating their properties.

Moreover, in 2009, their powers were expanded to work outside the settlements, and to carry out attacks against Palestinians, for example, the attacks that took place in the Janiya village in 2019, as a settlement officer named, Jacob Elharar from the “Talmon settlement” stormed it, and opened fire at a Palestinian citizen at a barbershop, and arrested, and handed him over to the army. On the other hand, the Local Committee for Planning and Building at the Occupation Municipality in Jerusalem approved a plan to establish a new settlement neighborhood west of Sur Baher, comprising 1,215 housing units, a 28-story tower, and 11 residential complexes between 7 and 11 floors. In addition, 6 residential plots towards the main road in the neighborhood is provided, 1 section for open public spaces adjacent to buildings with open public space, and 9 plots for public buildings and institutions, which include a post-primary school, primary school, kindergarten, and gymnast in.

For his part, the Occupation Mayor of Jerusalem, Moshe Leon said, “We continue to build in Jerusalem. The construction of the housing complex south of Ramat Rachel is part of the municipality’s policy to increase the supply of housing in the city, by building in vacant areas and enhancing urban renewal.” In the West Bank, violations and attacks against Palestinian citizens and their lands continue, in clear harmony between settlers and occupation soldiers. Thus settlers have begun to establish a new outpost in the lands of Burin village, southwest of Nablus, as an extension of the “Yitzhar” settlement, which is built on the lands of the village and a number of neighboring villages. Citizens of the village said that in recent days the settlers have installed a number of caravans on 50 dunums there. Knowing that the Civil Administration in partnership with the “Samaria Regional Settlement Council” has provided various facilities for settlers to organize an off-road motorcycle championship in the northern West Bank with the aim of encouraging settlement.

The competition was held for the first time in the so-called Shahak Industrial Zone near the Shaked settlement in the northern West Bank, with about 140 competitors participating. The head of the far-right Samaria settlement council, Yossi Dagan, expressed his hope that holding such race there will become a tradition for many more years, especially since Samaria, according to him is located in the heart of Israel historically and geographically, and it should be a cultural and tourist center, as it belongs to all Israelis.
Read full account 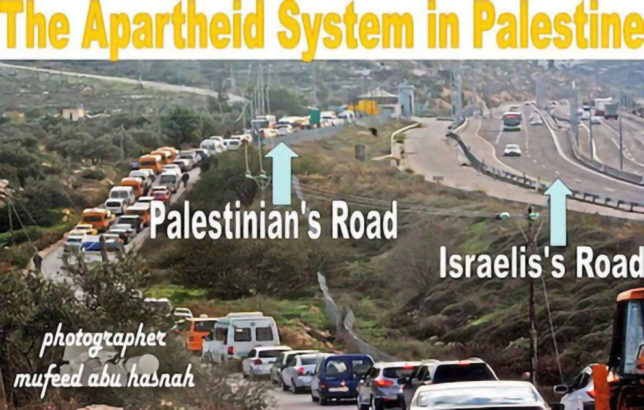 In the wake of George Floyd’s death and the protest movement that followed, thousands of organizations have taken to social media, expressing their support for Black lives and the right to protest injustice. Among those jumping on the bandwagon were 130 Jewish organizations, 800 rabbis, and the American Israel Public Affairs Committee (AIPAC). But talk is cheap. Several Israeli and Jewish human rights groups have called out AIPAC and others for their duplicity.

+972 Mag – an independent, nonprofit website run by Israeli and Palestinian journalists – recently posted an article entitled, “U.S. Jews are standing up for Black lives. Why aren’t we doing so for Palestinians?” The article boldly declared [T] here is a glaring problem with the way many mainstream American Jewish organizations are responding to this critical moment: they have not applied the same values-based approach to Palestinian rights and Israeli state violence as they do to U.S. police violence. Because of this inconsistency, the responses of many Jewish groups to the current events in the United States seem hollow at best and self-serving at worst… For many, this dissonance makes it harder to take Jewish commitments to racial justice in the U.S. seriously, while the same groups strenuously work to uphold similar systems of oppression in Palestine-Israel. It is essential that we speak out with equal zeal and righteous indignation against Israeli state violence and for justice for Palestinians.

IfNotNow, a Jewish organization that supports many (but not all) Palestinian rights, chided AIPAC for claiming solidarity with the Black community: “At what point in time was AIPAC ever committed to equality, freedom, or justice?” (AIPAC, the American Israel Public Affairs Committee, is one of the major Israel advocacy organizations in the U.S.)
Source:

The PLO’s Popular Front for the Liberation of Palestine (PFLP) called for escalating “all forms of resistance” against Israel in the aftermath of two home demolitions in the east Jerusalem neighborhood of Sheikh Jarrah on Wednesday. It warned Israel against proceeding with its alleged plan to “Judaize” Sheikh Jarrah and Jerusalem. The two homes were taken down amid a legal property dispute with the city, which confiscated the land decades ago for public space and now plans to build a school there for Arab children with special needs.

Palestinians and the international community believe that Israel is working to decrease the Palestinian presence in the city by evicting Palestinian residents to make way for public projects and the construction of Jewish homes. The PA Ministry of Foreign Affairs said in a statement that it “condemns in the strongest terms the heinous crime committed by the occupation forces and police at dawn today in the demolition of two homes for the Salhia family Sheikh Jarrah, amid brutal measures and collective punishment imposed on the area, where they used extreme violence and sound bombs, and arrested all the solidarity activists present in the place…This crime falls within the framework of many crimes committed by the occupation authorities, militias and settlers in Jerusalem with the aim of completing its Israelization and Judaization and changing its existing historical, legal and demographic reality,” the ministry charged.

The PA ministry held the Israeli government fully and directly responsible for the “crimes,” warning that they would have “catastrophic repercussions” on the two-state solution and undermine any prospects of launching peace negotiations.

“The ministry calls on the US administration to fulfill its commitments and pledges that it announced towards the defenseless Palestinian civilians and towards the homes of Sheikh Jarrah neighborhood and Jerusalem in general,” it stated. The PA’s “Jerusalem Governorate” condemned the demolition as a “war crime” and urged the international community to immediately intervene to halt Israeli measures. Other Palestinian factions also echoed that call. Ahmad Ruweidi, a senior adviser for Jerusalem affairs to the PA president, called on the international community and the International Criminal Court to “end their silence and assume their responsibilities regarding the ongoing demolitions of Palestinians’ houses.” Denouncing the demolitions as “massacres,” Ruweidi said that the Palestinians will not leave their homes and lands despite Israeli practices and measures. He added that more houses were being targeted for demolition in Sheikh Jarrah and Silwan. PA and the Foreign Ministry called on the US to fulfill its pledge to reopen the former US Consulate General in Jerusalem, which had acted as a de-facto embassy for the Palestinians and which the Trump administration had closed in 2019.
Read more