The great escape leaves Israel humiliated
Israel is infuriated, embarrassed and self-humiliated. The escape of six prisoners from one of its most high security jails has shown how vulnerable power can be. This is added embarrassment to what it had to contend to from the outcome of the recent Gaza War. In that war, Hamas had demonstrated to the world that militant resistance is not just a cliché. It yielded results that demonstrated how the so-called fourth largest military in the world could also be pushed to a corner and feel punished. The only thing Israel gained as trophies from the ruthless killings and destruction it indulged in were a longer list of war crimes.

While Israel is indulging in brutalities in Occupied Palestinian territories, six courageous prisoners plotted their escape from detention. Israeli security and intelligence services have now involved for an entire week in what news outlets describe as ‘the largest manhunt’ in the occupation state’s history in the search for those six Palestinians who have left Israel looking unintelligent.

Imagine this: An escape from the high-security Gilboa Prison through a tunnel. Reportedly, tiny teaspoons were the main tool of the digging. Probably a bit more at certain times of the day! The hunt for the six is on and has terrified innocent Palestinians for the viciousness of the search. The Jerusalem Post reports that this ‘massive manhunt’ involves police, Shin Bet internal security agents, Border Police and troops from two IDF battalions and fourteen companies of soldiers, as well as Special Forces. The newspaper added that there are around 200 roadblocks in place across Israel as part of the efforts to find the escapees. The Post reports further that Special units including dog handlers and air support are also involved. More than 750 military vehicles are dedicated to the search. There is alarm and anger about the security lapses that may have aided the fugitives’ escape.”

It is a sign of utter desperation in the Israeli army circles that prompts its forces to resort to vicious violence against protesters who have come out to express solidarity with the six Palestinian fugitives. The Palestine Red Crescent reports that relatives of Palestinian prisoners have been arrested and Israeli forces have resorted to firing tear gas, rubber-coated bullets, and live ammunition at crowds who were taking part in rallies across various cities in the West Bank. Those wounded number a hundred or over.

In a report the movement of prisoners in Israeli jails and detention centers have sworn to revolt against all prison administration laws, if the ‘repressive and punitive’ measures taken against them continued since the escape of six prisoners from the heavily guarded Gilboa prison.

The Movement of prisoners stated: “The collective Palestinian pride in the prisoners who escaped from Gilboa Prison stands in direct proportion to its reputation as the most highly guarded prison for security offenders. It is so well-secured, as is usually noted, that some ex-prisoners have floated the idea that the six men were helped by one of the guards. In any case, Islamic Jihad spokesmen are asking everyone to call this not an ‘escape’ but ‘an act of liberation,’ with the prisoners being lauded for liberating themselves.” 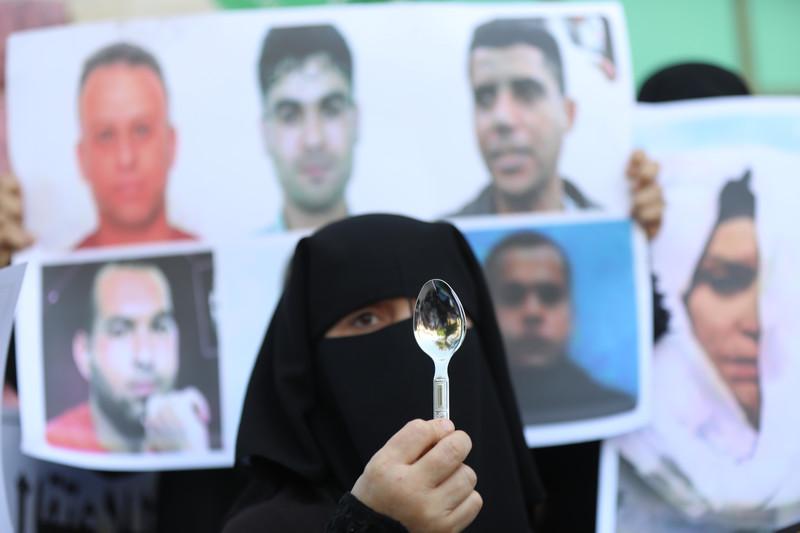 Israeli authorities have grown increasingly frustrated, embarrassed and perplexed in the days since six Palestinians escaped from one of Israel’s most fortified prisons. Amid speculation that the men might be hiding out in the West Bank, or could have crossed the border to Jordan, Palestinians are praying for their safety and hailing them as heroes.

Their escape is a huge morale boost for Palestinians, as it once again shatters Israel’s image of strength and invincibility in the face of an occupied people struggling for its freedom. The seemingly impossible feat has generated comparisons to The Great Escape – the movie retelling the epic story of Allied prisoners of war who tunneled out of a heavily guarded Nazi POW camp during World War II.

From the bathroom of their cell in Gilboa prison in northern Israel, the jailed Palestinians dug a 20-meter underground tunnel that emerged just outside the prison walls under a watchtower. The majority of the prisoners had been accused of involvement in planning or carrying out attacks against Israelis, and four of the six had been serving life sentences. Two had been awaiting trial.
Read more:

Israeli authorities closed eating venues in prisons. They also said that Israel ordered an end to visits until the end of the year, citing a prisoner advocacy group.

The Arab-Israeli news outlet arab48 reported that police in the northern city of Acre prevented a protest in solidarity with the escapees from taking place, citing threats from right-wing Israelis.

Israeli forces are now conducting a massive search, and there have been large protests in solidarity with the escapees in the West Bank and Jerusalem. The men were in prison in relation to attacks on Israelis.

The incident has further damaged relations between Israel and the PA. Palestinian presidential spokesperson Nabil Abu Rudeineh avowed that there will be no peace until Palestinian prisoners are released. The internationally recognized PA sometimes works with Israel on security issues and is unpopular with much of the Palestinian population. Some Israelis are also upset with the authorities over the escape. Families of resistance victims protested outside of Ofer Prison. They contended that prisoners are treated too leniently, the Israeli news outlet Arutz Sheva reported.
Read more
Read more:

Reunification is My Right – “Second-class citizens”
Muhammad Abu Arqoub runs a campaign called Reunification is My Right. Living in the occupied West Bank city of Hebron, Abu Arqoub married a Jordanian 10 year ago. “My family suffers a lot as we cannot move freely,” he said. “My wife has no Palestinian identity documents, even though she is married to a Palestinian and has three Palestinian children…She has not been able to visit her family in Jordan since we got married,” he added. “She follows their news with a broken heart. She is just a few miles from them, yet she cannot join them because of a piece of paper.” His wife has also applied for a passport from the Palestinian Authority but has never been granted one. Without such a document, she is confined to Hebron. 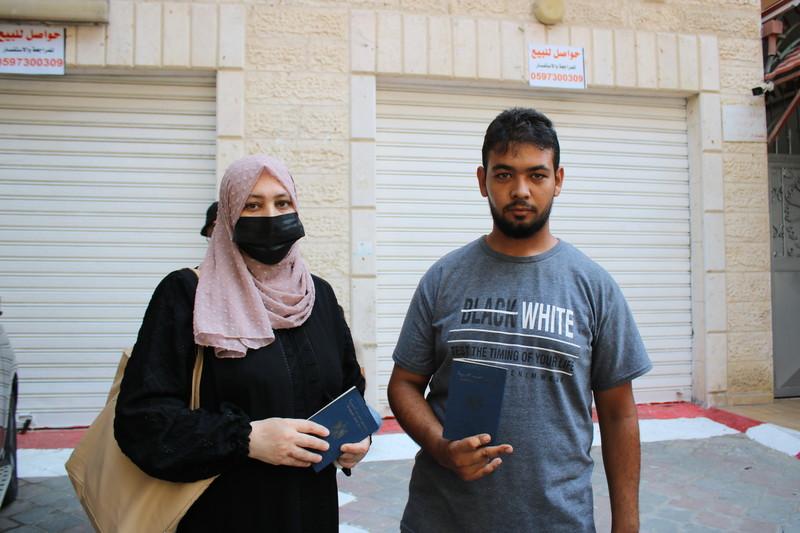 The Israeli military will not allow her through the network of checkpoints it maintains around the city. “When any of our children need to have a check-up in a hospital outside Hebron, my wife cannot accompany us,” Abu Arqoub said. Abu Arqoub frequently takes part in protests focused on family reunification. He feels that the Palestinian Authority has ignored his calls for action. He is demanding that pressure be exerted on Israel so that Palestinians can move freely. “We are frustrated but we will never give up,” he said. “We are working to keep this issue alive, to let everyone know that we are being treated as second-class citizens.”

Rajaa Khader, 51, has been unable to see many of her relatives for two decades now. She lives in Gaza; they live in Jordan. “My father passed away in 2008 and I did not see him before his death,” she said. “My sisters and brothers got married. They have big families but I do not know any of their children. I am isolated and imprisoned here in Gaza, without the basic right of being able to travel and see my relations.”
Source:

The revelation that Pegasus – spyware developed by the Israeli cyber-arms company NSO – was used to surveil opposition politicians, activists, public officials and journalists in India, has once again confirmed that the right to privacy, freedom of speech and expression and freedom of the press are threatened under Prime Minister Narendra Modi’s Hindu nationalist government.

Relations between Israel and India have not always been as friendly as they are today. In 1938, Mahatma Gandhi had famously said, “Palestine belongs to the Arabs in the same sense that England belongs to the English or France to the French.” Jawaharlal Nehru – who eventually became the first prime minister of independent India – expressed his sympathies for the Jewish population facing persecution in Europe. However, Nehru also insisted that “fundamentally the problem of Palestine is a nationalist one. The Arabs are struggling against imperialist control and domination. It is a pity, therefore, that the Jews of Palestine instead of aligning themselves with this struggle have thought it fit to take the side of British imperialism and to seek its protection against the inhabitants of the country.” Three decades before the establishment of formal diplomatic ties, Israel had supplied weapons to India during the Sino-Indian War of 1962. India also used Israeli weapons in the Indo-Pakistan Wars of 1965 and 1971. And, when India’s foreign intelligence agency, the Research and Analysis Wing (RAW), was established in 1968, its first spy chief RN Kao was tasked by Prime Minister Indira Gandhi to establish ties with Israel’s Mossad.