As the dust settles over Trump’s announcement of the ‘Deal of the Century’, what is the real impact of the White House vision for Palestine? It bring us back to the past, it exposes the present but it is today more than any time before up to the people in Palestine, across the region and worldwide to determine the future.

Trump’s so called ‘Deal of the Century’ is so only in one sense: it brings us back over 100 years to the darkest age of colonial supremacy. The plan ignores the Palestinian people and their rights emulating Arthur James Balfour, the foreign secretary of the British government colonizing Palestine at that time, when he announced in 1919 that in his ‘deal’ for Palestine he would not “go through the form of consulting the wishes of the present inhabitants of the country” because the British empire didn’t care about “the desires and prejudices of the 700,000 Arabs who now inhabit that ancient land”.

Like Balfour and Winston Churchill, Britain’s prime minister at the end of the II World War, Trump simply ignores the Palestinian people. European racism and its offspring in the United States are informed by a sense of supremacy that treats non-western people as if they do not matter, their lives and land can be invaded, seized, and turned into settler possessions. This is an experience the Palestinian people shares with the people across the global south, in Afghanistan, Iraq, Syria,  Libya, in Africa or even larger powers such as Iran, China or Russia.

The plan proposed by Trump returns us also to the times before the two World Wars and the development of the framework of international law and human rights created to give guarantees to people and avoid more wars. With its plan, the White House encourages the breach of the main pillars of the United Nations and international law, the prohibition of annexation of territory by force and the right to self-determination. Israel is given full US endorsement to swallow up large parts of the occupied West Bank and to continue its illegal settlement policy there. Jerusalem is to be annexed as undivided capital. This is encouraging criminality, land theft, racism, colonial domination – at a global level.

Trump’s plan brushes aside not only the UN Charter, the Human Rights Convention and the IV Geneva Convention: it endorses apartheid, defined as a crime by the United Nations almost 50 years ago, as a ‘perfect solution’. Apartheid in Palestine is one face of a broader system of Zionist settler colonialism that is also exercised through a repressive military occupation and settlers fascist behavior in the West Bank. Palestinians are in typical colonial fashion regarded as an inferior ‘race’ of humanity not entitled to the same privileges and rights other humans do. The map for what is considered a ‘Palestinian state’ is nothing else but a re-proposition of the map of isolated, besieged and impoverished Bantustans carved out for Palestinians by Israel’s illegal apartheid wall in the West Bank and the hermetic siege of Gaza, within the framework of settler colonialism and an apartheid state exclusively for Jews. The planned inclusion of Palestinian populated areas that are part of Israel since 1948 to the future Bantustans is what the UN Convention for the suppression of apartheid defines as a measure “designed to divide the population along racial lines by the creation of separate reserves”. Another core element of the crime of apartheid is the denial of the right of return to one’s home and country. This is what the majority of the Palestinian people are suffering since they have been expelled by Israel’s recurring waves of ethnic cleansing. Trump’s plan hails this ongoing violation of human rights as a solution.

As well taken from the past is the plan’s mantra about economic prosperity in exchange for rights. Palestinians have heard this since the Oslo Agreements in 1993. No surprise then that last year’s conference that was ostensibly a presentation of the economic part of Trump’s ‘deal’, on the economic prosperity of the Palestinian people didn’t fool anybody. We have since long learned that the possibility of development needs as an essential precondition the fulfillment of our right to self-determination, the end of the occupation, including the siege on Gaza and the systematic colonization and theft of our land, and the return of our refugees, which US policy is robbing of the necessary support by cutting funds to UNWRA, the UN agency that, if not rights, gives at least relief to the millions still in camps. The economic part of the plan comes down to nothing more but an effort to simultaneously blackmail the Palestinian people but cutting off needed funds, while luring Arab regimes into supporting and paying for the plan while giving nothing in return to Palestinians, More than that, economic rights and other human rights can’t be traded off against each other but are all essential elements of the rights Palestinians are entitled to.

Simply put, the plan is not a vision but a remix of age-old colonial and racist ideas and an exact description of the policies Israel is implementing on the ground. During the last three decades since the signing of the Oslo Accords Israel has systematically accelerated the colonization of Palestinian land and has reached now a definition of the land it wants to annex, more or less defined by the walls it has built around Gaza and in the West Bank and Trump’s plan is made to confirm this status as the ‘solution’. 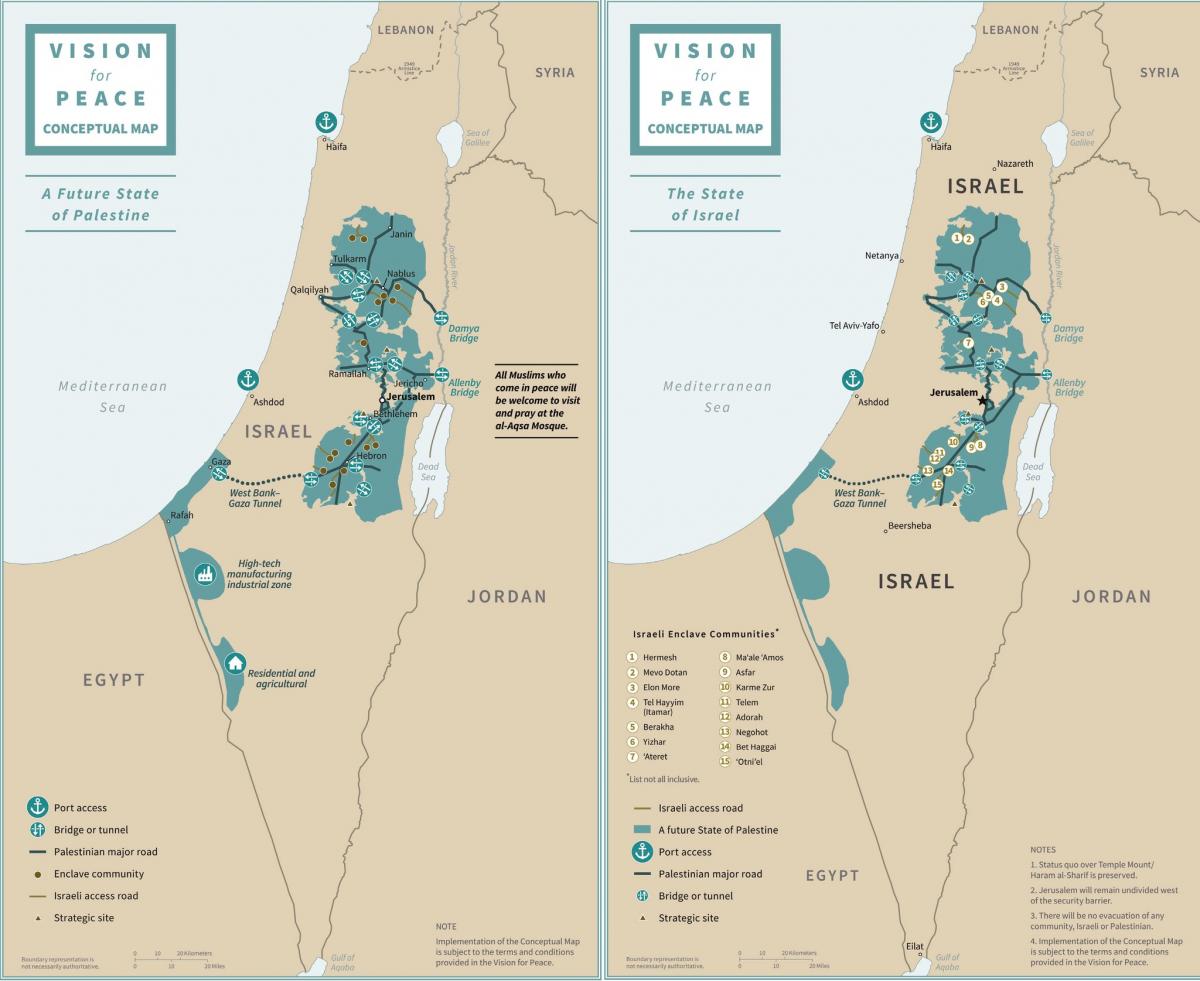 It puts the nail in the coffin of the idea of a two-state solution but the coffin itself was already prepared by Israel with decades of settlement construction and the building of the apartheid wall. The map released with the ‘deal of the century’ is the re-proposition of the path of Israel’s apartheid wall, paving the way to the annexation of more than 60% of the West Bank, primarily the Jordan Valley.

Beyond the annexation of large parts of the West Bank, this plan reiterates some of the steps already taken earlier in the Trump’s presidency. Starting in 2017, the White House has recognized already of Jerusalem as the capital of Israel and moved the US embassy to Jerusalem. Later, it closed the Palestinian mission in Washington and the US consulate in East Jerusalem that had served as an informal embassy to the Palestinians. The last onslaught on international law and repeated in the plan was the recognition of Israel’s total sovereignty over the Syrian Golan Heights.

In front of Trump’s attempt to roll back history to the heydays of colonialism and wars, what is next?

As Palestinians we have an urgent task of unity and steadfastness. National unity with consensus on political objectives is more important now than ever before. Coordinated popular struggle and the steadfastness of Palestinians in areas threatened with annexation should  prevent on the ground the implementation of Israel’s policies and send a message to the world that nobody but Palestinians themselves will forge their destiny.

The people in the Arab world have a particular important task in ensuring the lures and threats of the US administration do not corrupt their regimes even further. No business as usual with apartheid.

The US has torn down the smoke screens by recognizing and endorsing Israel as the colonial apartheid regime it is and, at the same time, has excluded itself from the tables of diplomacy. The role of the US has shifted from that of a lawyer defending Israel’s illegal policies to being an instigator of international crimes. If the international community accepts this, it will spell the end for any guarantees that states have.

Unsurprisingly, the Arab League, the Organization of Islamic Cooperation, the European Union, the United Nations and many more are today proclaiming their commitment to a two-state solution and international law to salvage at least some international rules. Especially for countries in the global south and smaller, poorer, less powerful nations it should be evident that standing on the side of the Palestinian people today is essential if they don’t want to jeopardize the last international safeguards in an ever more savage world. If they haven’t saved the two-state solution, they’d better now save what is remaining of international law and the United Nations and finally start treating Israel’s apartheid regime as such, with all this implies.

Today, boycotts, divestment and sanctions are the only way forward and the only realistic peace plan on the table. They have worked in the case of South Africa, they will work in support of Palestinian rights.
https://www.stopthewall.org/es/node/10198