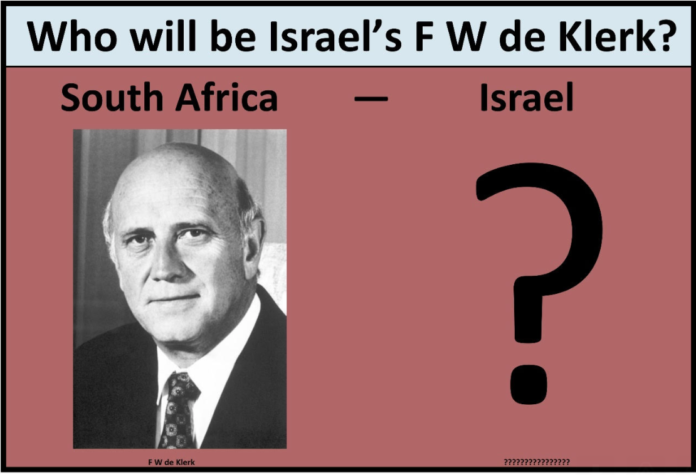 The death of former South African President F W de Klerk marks the passing of an era. De Klerk shared a Nobel Peace Prize with Nelson Mandela for his role leading the negotiations on behalf of the white South African government as they prepared the transition from white minority rule to a democracy where everyone in South Africa would have equal rights. De Klerk’s place in history is assured for that reason if nothing else.

But more to his credit, in the last days of his life he recorded a moving apology to black South Africans for the racism, abuse, indignities and brutality they suffered at the hands of the white regime which held power from 1948 to the first democratic elections in 1994.

Israel dates its racist policies towards Palestinians from 1948 also but, unlike white South Africa, it still holds onto exclusive power for itself in historic Palestine. Israeli human rights group B’Tselem describes Israel as “A regime of Jewish supremacy from the Jordan River to the Mediterranean Sea: This is apartheid”.

The end to Israel’s racist, apartheid policies towards Palestinians will come in a similar way to the ending of apartheid in South Africa. In South Africa the internal struggle by black workers, students and civil society organisations of all sorts against a white, colonial regime was reinforced by an international solidarity movement which promoted boycotts, divestment and sanctions of all kinds to isolate South Africa. This international pressure had built to the point that by the late 1980s the US and UK could no longer hold out supporting the old regime. The UK’s Maggie Thatcher and US President Ronald Reagan then insisted the white government begin a process of negotiating an end to South African apartheid in a way which would preserve its privatised, capitalist economy for big business to continue to benefit.

In a case of “pass the parcel” de Klerk found himself holding it when the US and UK were forced to stop the music. In many ways De Klerk was no less hard line than any of the other racist leaders who preceded him. It was the broader international situation which forced the leading western nations to demand he do so – and he did!

However, the way history tends to be told through personalities, some are already describing de Klerk as an enlightened individual who finally saw the wrongs of apartheid and determined to end it. Not so. Internal and international pressure tipped the balance and people around the world, in spite of their governments, can claim credit for helping pile it on. But De Klerk will be the white South African leader remembered by history – all his racist predecessors have already faded into oblivion.

International pressure has been building on Israel now for many years and I think 2021 is the turning point. Despite what political leaders in the US and Europe say, the ground has begun its inexorable shift away from the Israeli narrative and support for the Palestinian people as an indigenous people driven off their land and persecuted by a racist, colonial regime is taking centre stage. From now Israel will increasingly struggle for legitimacy and survival as a racist state, despite the hubris of its leaders and despite how many atomic bombs and cruise missiles it has. They will count for nothing when political support runs out.

There will be those who say Israeli hardliners will never agree to equal rights for everyone and point to the settler movement – living in illegal Israeli settlements on Palestinian land – whose racism and brutality is renowned and which is increasingly being used by Israel as the frontline of their plans to continue driving Palestinians off their land. But South Africa had its equivalent of the settler movement among hard-right Afrikaners who were side-lined and isolated when push came to shove. The same will happen in Israel. Even before negotiations for equal rights have begun a quarter of Jewish Israelis say they would be happy to live in a country where everyone has equal rights. That number will tip over, as it did in South Africa, to majority support once the path to democracy is taken.

Internationally the situation is moving in a similar direction. Most Jews living around the world have already made the mental shift. 25% of Jews in America describe Israel as an apartheid state and among young Jews the figure is up to 38%. Here in New Zealand the same generational change is evident in the Jewish community. The old certainties are going and the deep-seated racism within the New Zealand Jewish Council is seeing it lose credibility and influence. It will soon be a spent force.

The US will continue to tend to Israel’s whims until that internal and international pressure builds to the point where the US simply forces Israel to negotiate a deal with Palestinians, as the US did with South Africa. Initially the US will try to force a two-state solution to maintain a strategic position in the Middle East but the tide has run out on that option. Israel’s illegal settlements have turned what could have been a Palestinian state into a block of Swiss cheese. A one-state solution where everyone has equal rights is the only viable way forward.

Our job in the international solidarity movement is to build the pressure and the three key words here are Boycott, Divestment and Sanctions – the three words which terrify the state of Israel as much as they terrified white South Africa. Whenever Israel howls about BDS and tries to shut down pro-Palestinian campaigns, the Palestinian people are winning.

So who will be Israel’s F W de Klerk? Who will be the Israeli leader left holding the parcel when the music stops? Will it be Naftali Bennet? Benjamin Netanyahu? Yair Lapid? They can at least be sure they will be remembered by history when all their racist predecessors are just awful grey historical footnotes.

It doesn’t really matter which one it is. Once the pressure is on even the most racist, reactionary, fascist leader will do what the international community forces them to do.

In the meantime those of us outside Israel should, in the words of the international expert on apartheid, South Africa’s Archbishop Desmond Tutu, “call it apartheid and boycott”.